Bitcoin is a virtual cryptographically protected currency that ensures the work of a digital payment method... Approximately every 10 minutes a new block is found in the global network... All transactions ever made are kept in a special public registry called blockchain... 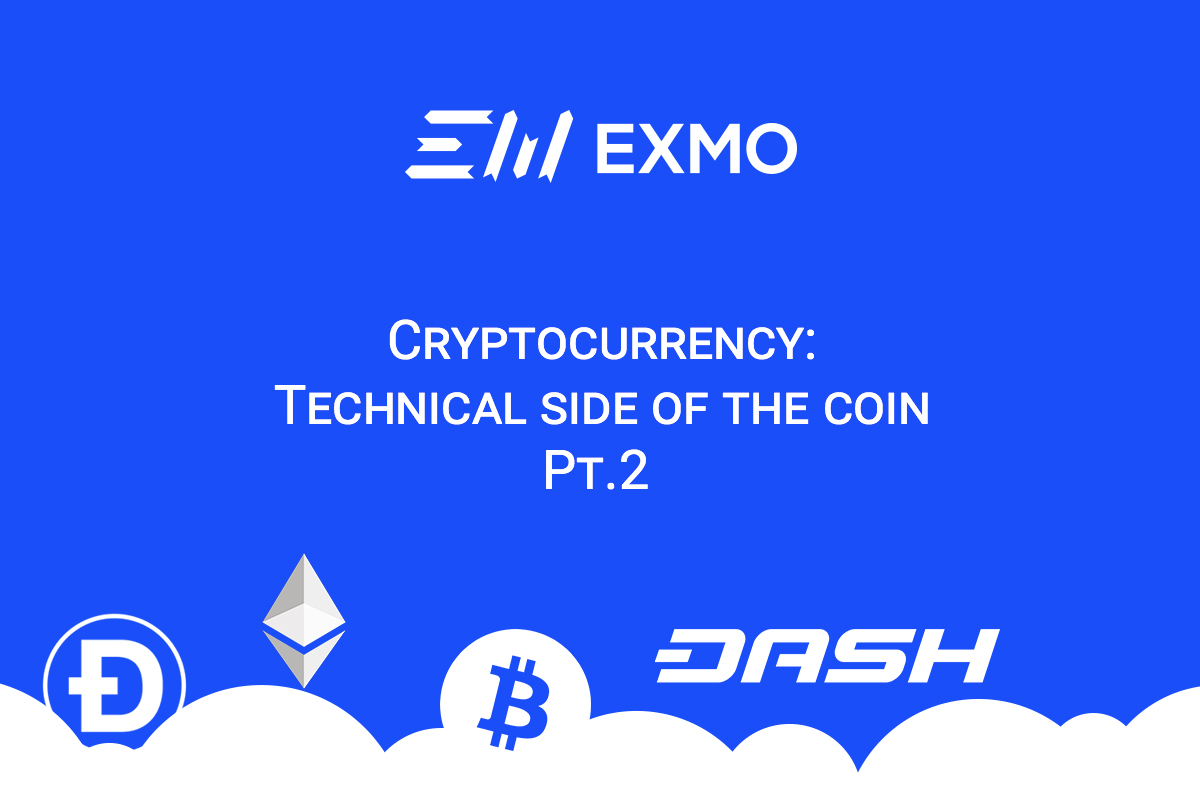 Picking up where we’ve left off with the first part: "Cryptocurrency: Where to start? Pt.1 – Introduction" of our series of articles, we continue to lay down the specifics of how cryptocurrencies actually work for new users. Today we will move on to the technical aspects of cryptocurrencies, and, above all, bitcoin.

In this piece it would be unduly to delve into processes of the work of Bitcoin or other cryptocurrencies, inessential to the work of an average user. For this this reason we will point out only the prime aspects that aren’t too perplex for understanding; Any person, at least relatively knowledgeable in the principles of how computers and internet operate can grasp them.

From technical standpoint, just like any other cryptocurrency, Bitcoin is a virtual cryptographically protected currency that ensures the work of a digital payment method that operates via internet. The e-wallet side of bitcoin is decentralized and founded on equal distribution of power among the participants. The p2p principle or peer-to-peer that is also used in Torrent communications protocol and a number of other software products. Nodes (peers) of a cryptocurrency network can simultaneously act as both servers and clients, however none of them can gain control over the network. Inability for any node to dominate all the rest is at core of decentralized system. In the network payments (transactions) are transmitted from the sender to the addressee via a chain of nodes. These only confirm the fact of payment and all of its record details set by the issuer, with no ability to block the payment, alter it, or redirect it to another addressee. Bitcoin is called a payment system without the middleman and rightfully so because the nodes that pass the transaction cannot cancel it or change any circumstances of the payment.

People who assist in running the processes of nodes are called miners, and what they do is called mining. In the process using their calculation capacities all the transactions issued by the owners are united into blocks protected by a special encryption. Professionally speaking, the miners “generate” and “calculate” transactions in the new blocks. Each time one of the miner communities (pools) gains a new block, it automatically gets a notice that the community gets a reward for a solved block. This reward is used at the discretion of the community. Usually distributed to the participants proportionally to their output capacities.

Approximately every 10 minutes a new block is found in the global network of miners and approximately every 10 minutes does one of the miner pools become 12.5 bitcoin richer. Additionally to this sum, miners get an additional percentage of around 10%-15% (and lately 30%-40%) from regular users in terms of a commission that goes along with all the transactions included into the calculated block.

Standard for today, it should be said that the reward of 12.5 bitcoin for calculating a block has been different in the past. Approximately every 2 100 000 minutes or 4 years, which equal to 210 000 blocks, the general reward is divided by two. Standard price from the beginning of 2009 to the middle of 2012, when the first 210 000 blocks were calculated, was 50 bitcoin rewarded for one block, with 25 bitcoin for the next 4 years and today’s reward of 50 bitcoin for a block will hold close to the middle of 2020.

The longer the network exists, the more laborious calculations are used for resolving new blocks and the lesser the chance to “hack” the cryptocurrency.

All transactions ever made are kept in a special public registry called blockchain. On blockchain all users can see the information regarding any transaction. However, no one can change whatever has been recorded in blockchain, because millions of synchronized copies of blockchain are kept all over the globe in the local wallets of bitcoin network members. This makes bitcoin a non counterfeitable currency.

On user’s volition cryptocurrencies can be transferred in huge quantities. In case one bitcoin wallet collects up to one million bitcoin, the owner can send the entire million in one transaction. The same goes for small quantities – bitcoin, as well as the major part of other cryptocurrencies is highly fissible and, should the need arise, any bitcoin can be split into 100 000 000 pieces. However, sending small transactions can often be unreasonable in terms of commissions.

This is the second part in our series of educational materials on work with cryptocurrencies for beginners. Get to know about new articles in this series and useful updates by following us on Facebook, Twitter and Telegram. See you in our next piece.

Additional materials that may help you:

What is EX-CODE and what can it be used for?

What are the pros and cons of investing into cryptocurrency

Advantages of purchasing and selling bitcoin on a cryptocurrency exchange

How EXMO API works and how to use it

Thank you for staying with us!
EXMO Team